As more and more people discover my book, “Castle of Blackwood Moors,” folks ask me for more details since they would like to run adventures there.  So here you go! Today’s post is for you.

CoBM takes place on the eastern central portion of the Middenlunds, a bunch of not-so friendly city states along the western edge of the continent east of the Great Inner Sea.
Make sense? Really? I am totally confused, so in order to un-confuse me, lets post some maps of the area I call the Central Murk Lands. 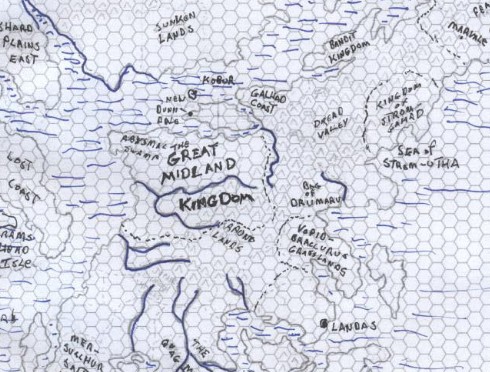 Okay. This is from the map I posted earlier  (“What Else, What Else?”) of my old world map. Anyway, the point is here is where the kingdom arose. Something important to note is New Dundale, and the Kobur Krogan was not part of the original map. It was written in later when some players of mine tried to form their own kingdom on the western edge of the island. Kobur Krogan was a dwarven kingdom based on an outcropping of rock that jutted from the sea. The name was left blank since when I wrote it I did not think of a name for it yet and when I did, I never went back to write it in since I am kind of a scatterbrain at times.

This was created in one of the early versions of Flash (I made many maps like this, which you will see in later posts) in the late 90’s.  While this was created for a D&D campaign, to can see the beginnings of the map which was used for ‘Castle of Blackwood Moors’.

You can see I like things realistic. I hate straight rivers.You can get a sense of scale from the (unfinished) scale in the upper left corner. It is in miles, not kilometers, sorry metric folks. That said, I still was tinkering around with things like cutting the Abysmal Swamp (the land just north west of The Bandit Kingdom of Graennor) off with water, and some times it is not, shows I still try to tinker around with stuff.

Lets move on…. shall we? 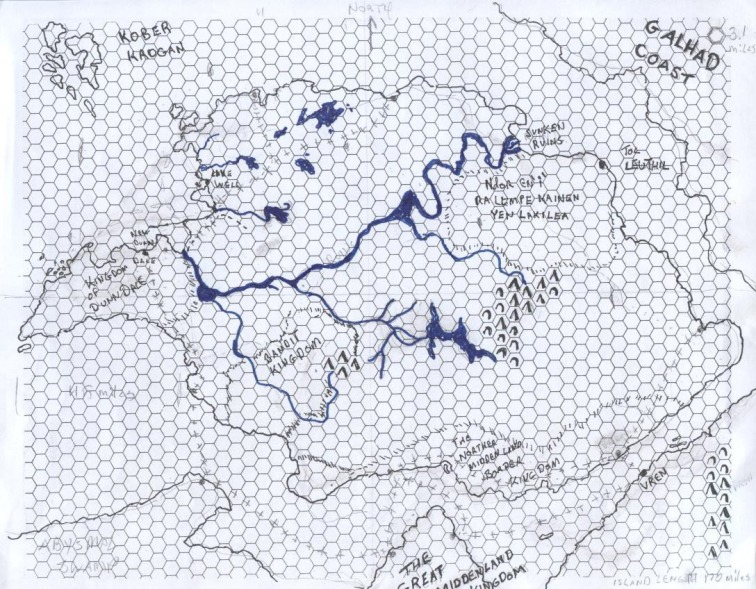 Asking my friends where they would like to start a game, I proposed a campaign anywhere in Middenlands but the players wanted to explore the isle, so that  is what I fleshed out. Kobur (yeah I know I spelled it wrong, I mentioned I am quite absent minded) Krogan finally gets a name on this map. I also make a HUGE mistake that drives me crazy. I have ONE river leading into the lake in the north east corner of the island, but TWO rivers leading it, which is not impossible, but very unlikely. If this map is ever redone, I will fix that. Now that I think about it, the rivers are a bit too straight here also. Bad me.

So while the dwarves reside in Kobur Krogan, there are elven lands on the east, north east. Now then, I need to mention that elves and dwarves in my world are similar yet still different. I will cover that in a future blog post since I don’t want to get that side tracked.
So, back to the island. This island also has a bandit kingdom in the western, south western part of the map ( I have a lot of bandit kingdoms since I envision that in a world with monsters and sorcery,  bandits and raiders would be organized, since small unorganized groups of bandits would be promptly devoured). Okay, AGAIN, lets go back to the island. You will notice that the northern, central and south eastern portions of the island are relatively unknown. This is where the majority of the beastmen live, I tend to use beastmen instead of orcs, ogres and the like. I will talk about that when I talk about elves and dwarves. Finally, there is a kingdom along the southern shores of the island, but it is a kingdom in only the roughest of words. Mostly, people from Middenlund reside here just to take advantage of the fishing waters and timber from the island. They get raided from beastmen, elves and other monsters often so the life expectancy is not great, but if you can survive, there is money to be made there.

Okay, the end of today’s ramblings. 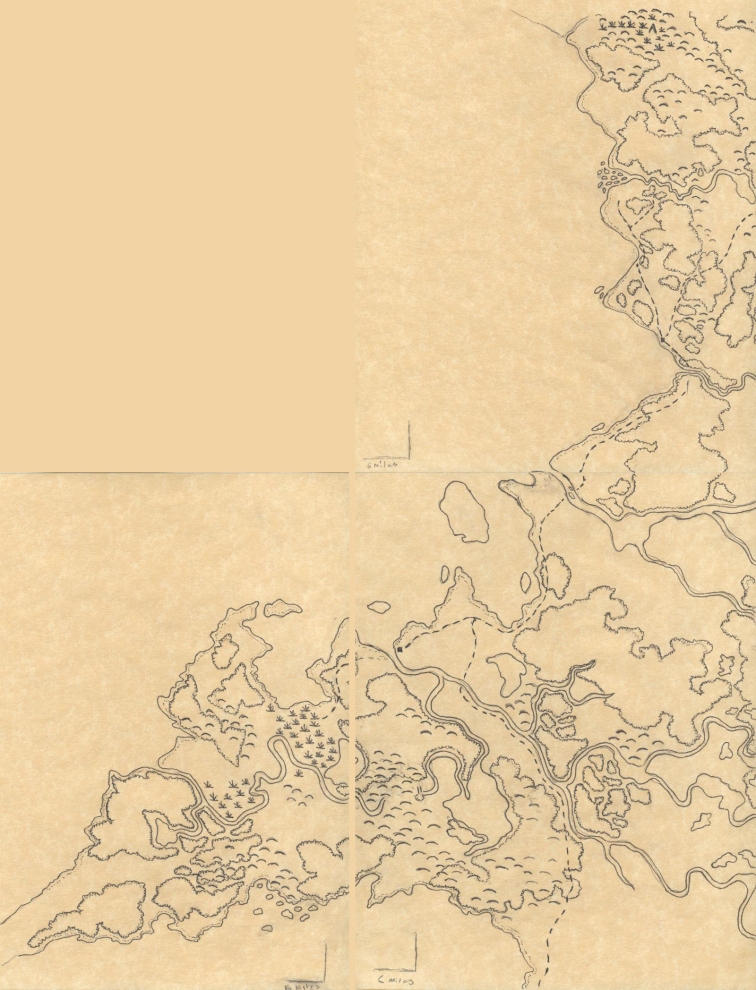 Okay, here is the (poorly pieced together) players map of New Dunndale. At almost the exact center of the map you can see a little square alongside a river, near the ocean. This is where the players decided to build their fledgling kingdom and it was here that “Castle of Blackwood Moors” really took root. Even though the book takes place to the south, my players brought up a lot of things not covered in a lot of RPG rules (that I have found). So how much wood does a timber mill produce in a day (realistically)? How many logs does it take to build a log cabin (again, realistically)? How many people does it take to minimally keep a timber mill working? How many logs does one person cut in a day? How many people does it take to keep a fledgling kingdom operational? You get the idea. But I am a sucker for details and the whole (It’s magic!) excuse drives me crazy.  But that is one of the reasons I started the “Dungeons to Dominions” series.

Finally, you can see the 1 inch = 6 miles scale on these maps, which should give you an idea how big the original map is. In future posts you will see many, many more maps of the world, I have three binders CHOCK FULL of maps as well as many books detailing the contents of those maps.

But until those days come, I think that is enough for today.
I have since created rules for how many logs one person can cut per day, but if you know of actual official rules from here or there, please free to drop me a line. I always like to learn as much as I can about this and that.

Hope everyone is having a great day.