A few folks have asked me how do I do my world building, both for writing and the game I have been showing… That is a tough question. It is like asking someone, “How do you breathe?”  You just do.  I tend to be a highly detailed thinker as well, I love putting in endless amounts of details and backstory.. even if no one will ever know it but me.

But I do not want to blow you guys off, so I guess I will show you  a bit about my thinking process.  First off, I thought it would be interesting to explore the frigid north in a apocalyptic game. It seems after the fall of modern society, every where will be a desert; and if you live in the northern USA or Canada, you find this idea kind of unlikely (its 10 F outside as I write this). Second, I wanted to base a game in the central USA. Most post apocalyptical stuff happens on the coasts of the USA or in Austrailia (Max Rockatansky, you are the man), but never in the mid-west.

With this in mind, I chose Black Earth, Wisconsin. One: For reasons I mentioned above, and Two: There is only one town named Black Earth on the whole planet -Three: The name fits the Post Apoc genre very well I think – and Four, the entire town is only about one thousand people. Small enough to have lots of wilderness, but large enough there will be enough stuff to tinker around with inside the borders of civilization (what those things are, you will have to stay tuned).

So without further adieu, here are the first four steps of the creation of Black Earth.
1. The actual google maps picture (I actually drove to Black Earth and took about 100 pictures of the town as well, but I am not sure you want to see all of those… ah heck I will throw some in – Those will be Pictures 2 and 3 (yeah I am passionate, dedicated or maybe a bit crazy to actually go there and wander the streets for a day… or maybe all three). Picture 4 is of an adventure I wrote for Old School Quarterly (http://oldschoolquarterly.com/) but considering that we have been waiting for issue zero for two years… Lets just say I SUPER HOPE this mag finally gets off the ground. Picture 5 is the first map we did for the game, it is blocky since it was going to be an old school dungeon crawl like ‘Eye of the Beholder.”  The last picture is the most recent iteration, but I am not happy with the size… it should be bigger. But it is still functional. There might be a fifth version eventually. 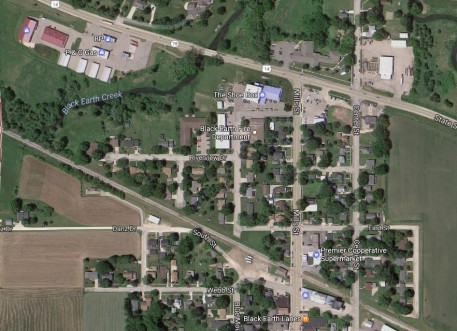 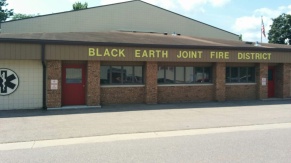 Hopefully you found this look into my creative process interesting. Thanks for stopping by the blog! I’d treat you to a cup of coffee if I could.