The last post before Ultima Dragons 25th and GDC pictures comes your way! After a 48 hour game jam, Matt and I cranked a lot of new content on the game. Again, it is still in pre-alpha and uses free assets found on the Unity store (in-fact if there were about 20 letters before alpha in the greek alphabet, that is what letter that would be. I think that is the greek letter of epilady or omegKarl). But it is what it is. Let’s take a look… SHALL WE!?!? 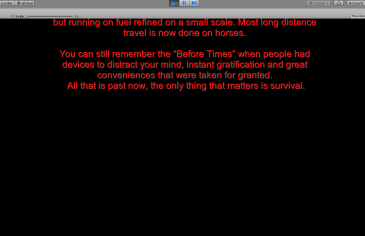 Picture #1 &2. We have scrolling text that gives back story now! Society fell. people panicked and squelched on their cable bills and switched the hot and cold knobs in their showers. Things were bad.

Picture #3 The game starts where you are in a car accident and as you crawl from the burning wreckage… something horrible and weird attacks you. For once its not the smelly guy who you sit next to every day on public transportation.

Picture #4 As you wander the ruined town, you see a spider the size of a dog wandering around. How did the spider get that big without radiation? Well, that is a story secret.. so I cannot mention it. What I *CAN* mention is Matt did an awesome job with the spider’s AI. It roams around looks for interesting things, like food (i.e. you) and when it spots you, it will chase after you. Do not even think about sneaking up on it, most spiders can see in all directions (didn’t they teach you anything in school?) and will then chase after you.

Picture #5 Spiders are still susceptible to mega beat downs, even after society collapses.

Picture #7 Talking with John Hodgson, a lone mechanic who still lives in the ruins.

Picture #8 A picture of the AI range Matt built. As you can see, creatures have a fairly long range to find things of interest. Which makes me happy. I dislike games where monsters, people, whatever stand on the same spawn point forever and ever (*cough cough* Dragon’s Dogma  *cough wheeze cough*)

That is this update! There is OBVIOUSLY a long way to go before this game even hits Alpha.. but I think it is coming along nicely. It definitely has soul.

Stay tuned for the next update… which will come from the most magical place on earth!

No, not Hogwarts. Man, Harry Potter fans are a rabid lot.

Hope great things are happening to you, and if not, hang in there. I know some days are bad, but you just have to keep trying.